Some sump or water pumping tasks require power and consistency to prevent long-term damage or to speed up a time-consuming process. Whether it’s that corner in the basement that always gets flooded or a pool that needs to be drained before cleaning, a pump that can move a lot of water quickly can seem like an utter godsend.

On paper, the Superior Pump 92341 1/3 HP Cast Iron Sump Pump Side Discharge with Vertical Float Switch would appear to bring this combination of power and speed. But does the paper match the reality? 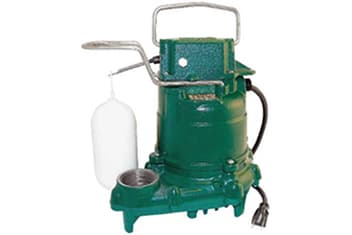 The Minneapolis-based Superior Pump has cultivated a sterling reputation for creating strong, sturdy pumps since it officially came into existence in the late ‘90s.

The cast iron pump is made with corrosion-resistant stainless steel, which is an important design quality to have on a machine built for cleaning up pools and puddles of water.

The Superior Pump Sump Pump builds upon its sturdiness by being a powerful agent of dryness. The pump can suck up an impressive 45 gallons of water per minute, which translates to 2700 gph. These numbers translate into a device that can clean up spills in a very efficient manner.

Because it has a vertical float switch as the name implies, the device can start sucking up the water sooner.

This may be a great relief for those that are worried about shallow puddles of water causing damage to the parts of their home below groundwater level.

The quick trigger also makes it possible for you to use the sump pump easily in other collected water situations that may otherwise be tough, such as the covering of your pool after a heavy rainstorm.

One word of warning, though: It does check in at 17.7 pounds, so it’s not quite as portable as some of the sump pumps on the market.

The power and the speed that the Superior Pump 92341 1/3 HP Cast Iron Sump Pump Side Discharge with Vertical Float Switch brings to the table is further balanced by the grace of its motor. Checking in at 4.1 amps, the device is designed to be energy efficient.

This design quality ultimately allows the device to have a greater level of longevity. Considering that the vertical float switch causes it to activate on a more frequent basis, having a little extra staying power is pretty important. This is terrific news for those that may otherwise be convinced that they’ll have to sacrifice performance for a less expensive tool.

There are a few drawbacks that are reported with the pump. As mentioned before, it’s a little heavier than other pumps. This may make it a little bit of a chore to lug around and position if you have to fashion the pump in a specific place.

Some customers have also noted the device has a little trouble handling sediment and other gunk that may be sucked up in the sump cleaning process. However, this tends to be resolved by putting the device in a bucket or some similar receptacle and drilling a few holes into the bucket’s bottom.

Why The Superior Vertical Pump?

While each type of float switch has their own merits, the vertical float switch may be your best option to use if you’re worried about too much water accumulating.

The activation mechanism that triggers the sump pump to act – and start sucking up the water – is located much lower on the pump as opposed to the tethered switch.

While this means the device will be activated with a greater sense of frequency, it also means that the water that forms within the sump won’t stick around in the sump as long.

It also means that it can be used in shallower sumps, which is a good thing – even shallow water can do some damage. What’s more, the vertical style tends to take up less room than a tethered sump pump, which means you can use it on narrower sump pits.

It has very impressive power, it is built to last, and it won’t break your bank. In addition to these essentials, its design allows it to work quickly and efficiently, whether you need to dry up a sump pit or need it to do some minor water-related maintenance.

If you are in the market for a heavy-duty sump pump that will be harsh on collective water but gentle on your pocketbook, the Superior Pump 92341 1/3 HP Cast Iron Sump Pump Side Discharge with Vertical Float Switch makes for a fine choice.